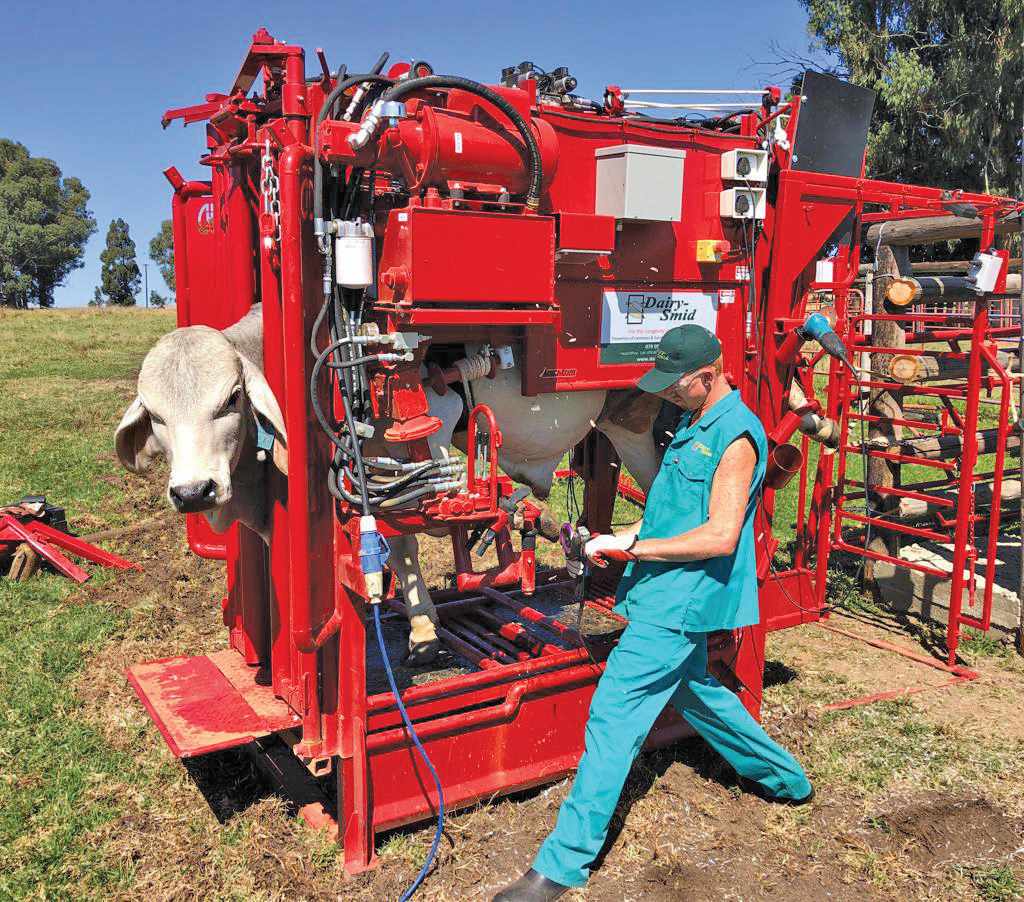 Maintaining hoof health in a cattle herd is very important. Gert van Zyl, director at DairySmid Hoof Trimming, a cattle hoof trimming company, says there are two things to look for when identifying hoof health: length and balance. He adds that hooves grow at a rate of approximately 5mm/month, with the toe horn being harder than the heal.

Therefore, the toe will wear down slower than the heel, causing imbalance. “This could be because of the field conditions where the cattle are kept and the nutrition the animals receive. The growth-to-wear ratio is implicated, and intervention is necessary,” he says.

Moreover, he says that a lack of balance is one of the main causes of lameness, especially if the animals walk excessively and stand for long periods on hard surfaces. “The front legs are connected to the skeleton by means of muscles and ligaments, while the hind legs are part of the skeleton, with very little suspension. Lameness is mainly experienced in the hind legs because of the weaker suspension.”

Poor hoof health can be caused by overgrown hooves, lesions on the hooves, or laminitis. Prevention of problems is achieved by ensuring that hoof trimming is done in time and that proper nutrition is in place. Compromised hoof health results in cattle battling to stand up and walking with difficulty.

Dr Klaas-Jan Leeuw, researcher of beef cattle nutrition at the Agricultural Research Council’s (ARC) Animal Production Centre in Irene, adds that poor hoof health or lameness can be caused by overgrown hooves, lesions on the hooves, or laminitis, which can be caused by metabolic issues, such as acidosis.

He says that while overgrown hooves can occur in cattle that graze on pastures that are soft underfoot, the main cause in this case is nutritional deficiencies. An overgrown hoof changes the stance of the cow’s foot, which affects movement and causes lesions on the pelvic limbs.

“Cattle who suffer from lameness, which can be clinical and subclinical, will eat less since standing is painful and getting up is difficult. Thus, production and fertility are reduced.”

Due to the environment where dairy and beef cows generally spend their time, they have different problems that affect their hoof health.

He adds that compromised hoof health results in cattle being less mobile, battling to stand up, and walking appearing to be difficult. In early stages of hoof health problems, the animal might visit the water and feeding troughs less, but eat more per visit and more rapidly. This means that the affected animal’s intake may not change much initially. However, as the condition progresses, feed and water intake will be gradually reduced.

Observing your animals is a good first step to identifying a problem. Leeuw says that farmers or farmworkers should carefully watch cattle that are being herded to a crush pen or milking parlour in order to identify walking issues, such as a change in gait or limping, and difficulty standing up.

Lameness in dairy cows is quite common, and aside from mastitis and infertility, it is one of the top three reasons why they are culled. However, lameness affects both mastitis and fertility.

Van Zyl says that mechanical and bacterial lameness are the main causes of lameness in milk cows.

Bacterial lameness falls into two main disease categories: foot rot and digital dermatitis (DD). The bacteria that cause these diseases are often found in water puddles and in holding pens at the parlour. Contamination is high and the spread of DD is severe. The best method of containing DD is through an effective foot bath programme.

While long and overgrown hooves reflect on the owner’s negligence and the environment where the animal is kept and not on the animal itself, beef cow genetics and conformation can have a negative influence on claws as well, says Leeuw. Cows with good conformation will have claws that wear down evenly and at a good angle.

The opposite is also true, and bow-legged or cowhocked animals will experience uneven claw wear and tear, resulting in lameness. Another condition that affects beef cattle is corkscrew, in which one claw does not match the other on the same foot. In this condition, the point of the one curls toward the other, and this repeats on the other foot.

The cause of this condition could be genetics or nutrition. The best way to identify the origin of corkscrew is to move the animal to an area with a harder surface, or to change its feeding regime. The animal should also have its hooves trimmed by a qualified bovine trimmer.

“The animal should be evaluated after at least eight weeks. Should these conditions recur after eight to 10 weeks, it is most likely a genetic condition, and the animal is not suitable for breeding,” says Leeuw.

Dr Magdaleen Wepener of the ARC’s Animal Production Institute says it is vital that farmers be well educated in identifying an animal that is having problems with its feet.

According to Van Zyl, the first sign of a hoof problem is as subtle as the cow simply arching her back when walking.

“Cows can be treated with anti-inflammatory medication and hoof blocks placed on the healthy claw to relieve pressure on the injured claw.

“The treatment of ‘blocking’, where a wooden block is fitted to the healthy claw to rest the claw being treated, is very effective. The block is fitted with a very strong adhesive. It stays on for approximately five weeks to allow for effective healing, while the injured claw is wrapped with a bandage. This must be done by a qualified and competent trimmer,” he says.

Leeuw says it is important to seek immediate relief for cattle that have hoof problems. He advises farmers to consult with a veterinarian or animal health technician. “Prevention is always preferred, but a subclinical condition is difficult to assess and needs input from a veterinarian. Prevention is achieved by ensuring hoof trimming is done in time and proper nutrition is in place to ward off lameness and laminitis.” Leeuw adds that as muddy conditions also impact on hoof health, farmers should ensure that water can drain out of pens quickly. He says that as abrasive surfaces, concrete or gravel can lead to hoof injuries or abnormal wearing, time spent on such surfaces should be limited or avoided.

Wepener says treatments with foot baths can be effective where proper concentrations of agents are maintained in the mixture. Early treatment with pressure relief and anti-inflammatory medication has also proved to be effective.

Nutrition plays an important role in hoof health and according to Leeuw, amino acids; fatty acids; vitamins, especially vitamin B; minerals, such as calcium; and trace minerals, such as zinc and copper, are important to promote normal hoof growth and strength.

“These components of the feed ration are involved in the keratinisation process, which ensures healthy horn growth.”

Leeuw says that energy metabolism is a factor; too much concentrate can cause acidosis or subclinical acidosis, and may result in laminitis.

‘ABRASIVE SURFACES, CONCRETE OR GRAVEL CAN LEAD TO INJURIES OR ABNORMAL WEARING OF THE HOOVES’

He adds that the basics of good hoof care, prevention and control strategies include  environmental control such as good housing for cattle, where the cows are provided with a dry, ventilated environment; making sure there  is no mud around feeding and water troughs; and making sure that cows are able to lie down on soft and dry underfoot conditions.

“Most cattle spend the majority of their time lying down (up to 18 hours per day), thus the environment must fit their behaviour. During periods of heat stress, cattle tend to stand longer to increase the body surface area that can dissipate heat,” Leeuw says.

Longer standing can exacerbate hoof problems and hoof health issues. Therefore, it is also important to provide shelter that can provide up to 6m2 of shade per animal. 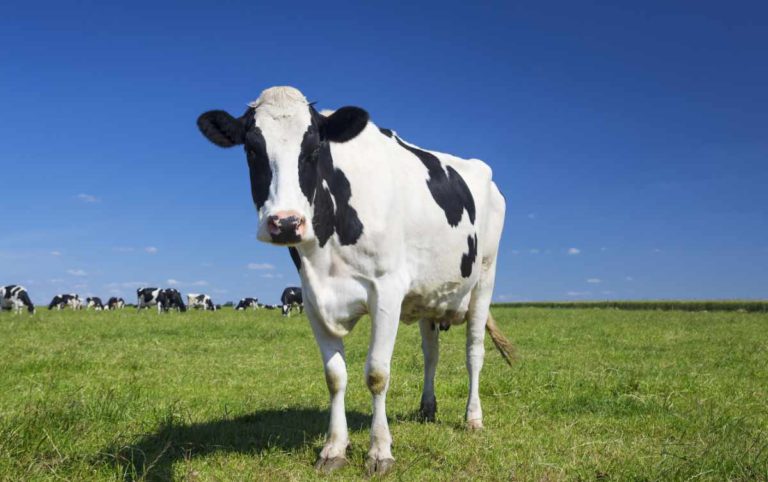 In association with The Dairy Mail and the MPO, we decided to plough back the knowledge gained over the past 24 years regarding lameness. 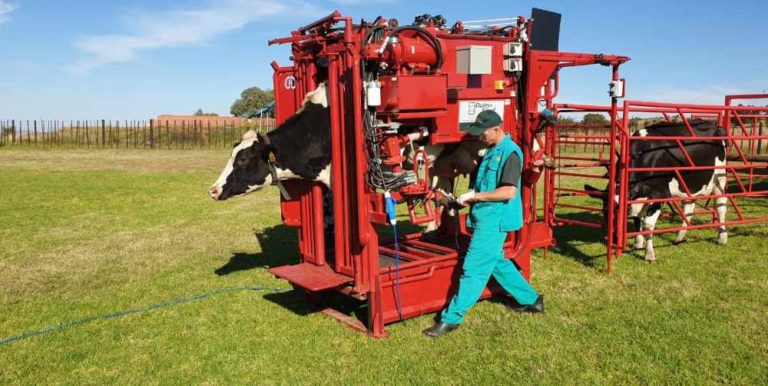 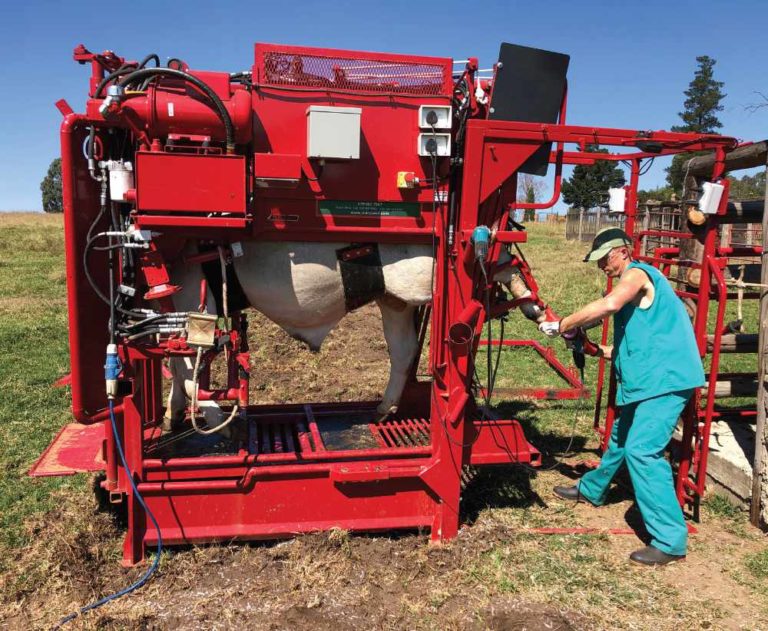 In parts 1 and 2 of this series I explained the factors that influence overgrown feet and how to identify the origin of the problem. I also touched on genetic disorders and how it re-manifests after a trim. This brings us to a frequently asked question: Is it ethical to trim feet? 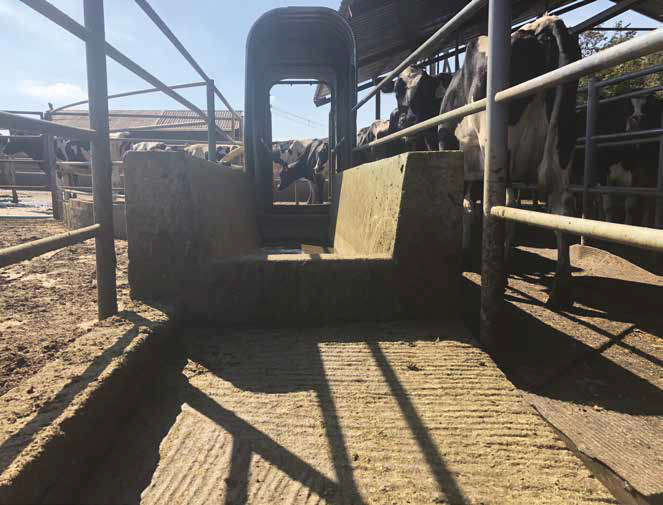 In this series, we have explained in detail how correct functional trimming can prevent mechanical lameness. The previous article was devoted to the most common form of bacterial lameness in dairy operations, namely digital dermatitis (DD). This can be successfully treated by a professional hoof trimmer, but the emphasis must be on herd prevention.

Seasonal Lameness. After the good rainy season we had this year, many grazing dairies experienced more lameness than usual. The types of lameness that we found in these situations were thin soles and toe ulcers.